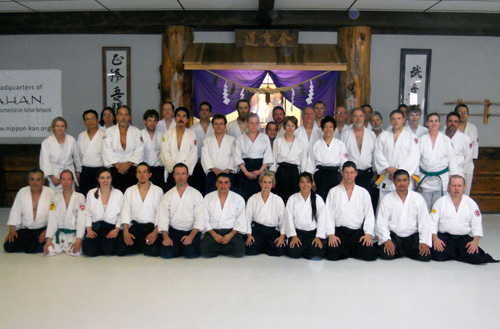 Stephanie Yap Sensei, Chief Instructor of Aikido of South Florida Iwama Shin Shin Aiki Shurenkai USA taught an inspiring weekend seminar at Nippon Kan dojo in early December, 2011. The weather was unusually frigid that weekend with temperatures outside well below zero. Even with challenging conditions, students traveled from a tri-state area to practice with Stephanie Yap Sensei, and her dynamic style and incredible expertise delighted all attending students.

Stephanie Yap Sensei began her Aikido training in the 1980's after graduating from the School of Engineering and Design in Miami, Florida. After training in Scandinavia for some years, Yap Sensei became an uchideshi under the late Morihiro Saito Shihan in Iwama, Japan. Over the past decades, she has spent a collective 3 years training in Iwama and Homma Kancho has very high regard for Yap's Sensei's technical expertise and leadership qualities. Homma Kancho has supported Yap Sensei teaching at Nippon Kan Headquarters in Denver, and dojos in Mexico, Brazil, Korea and Mongolia; working to introduce Stephanie Sensei to the world as "One of The World's Most Powerful Woman Aikido Instructor"!

Many thanks to Stephanie Yap Sensei for a wonderful weekend!

Written by
David Geras
Nippon Kan Board of Directors